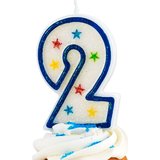 Parents of toddlers often express concern regarding their child’s speech and language development, wanting to know how their skills “measure up.” It’s human nature to measure your toddler’s verbal abilities against those of other children her age, but it is important to keep in mind that at this age there’s more variation in language development than in any other area. While there is a wide range of what is considered “normal” at the age of two, the following milestones should help provide a general guideline of what can be expected at this age.

Expressive Vocabulary
While children often develop words slowly between the ages of 12 and 18 months, between 18 and 24 months children’s vocabulary should expand much more rapidly. During this “language explosion,” many children acquire new words on a daily basis. By their second birthday, children should be saying a minimum of 50 words; many two year olds say as many as 300 words. While the majority of these words will be nouns such as Mommy, baby, truck, cookie, and tummy; they should also include verbs such as sleep, go, and run; adjectives such as hot, blue, and broken; and pronouns such as me and my.

Language Expansion
By the age of two, most children begin to combine words together to produce phrases. For example, a child this age might say, “want juice” to ask for a drink or “Mommy up” to ask to be picked up. Use of negative phrases such as “no bath” or “no want” emerge at this age as well. Two year olds also begin to ask simple questions such as “What’s that?”

Understanding Language
Around this age, a toddler should be able to follow one-step directions without gestural cues such as “Put this in the garbage” as well as some simple two-step related directions like “Get your shoes and put them on.” Additionally, two year olds can answer simple “yes/no” questions such as “Do you want milk?” and “Are you a boy?” by nodding/shaking their head or providing a verbal response. The ability to answer simple questions like “What is that?” or “Where is daddy?” is emerging around this age as well. In terms of receptive vocabulary, two year olds should be able to understand 300 or more words.

Social Language
Two year olds use language for a variety of purposes. They use phrases like “help me” and “more milk” to request; they also use words to express emotion, and to greet (e.g., hi). They use words like “hey” to attract attention and to reference joint attention – the shared focus of two individuals on an object (e.g., Look Mommy). Two year olds begin to use words like “please” and “thanks” to make polite requests. Verbal turn taking is also developing at this age, which is a precursor to conversation skills. When your child turns two, he will begin to show an increased interest in other children and will often get excited when with other kids. Two year olds play mainly beside other children (called parallel play), but are beginning to include other kids, such as in chase games.

Common Errors
Children this age make a number of age-appropriate mistakes. In regards to language, they may say “no” when they mean, “yes.” They make grammatical mistakes such as referring to themselves as “me” instead of “I” (e.g., Me hot). They may make overgeneralizations such as labeling all colors “blue” or referring to all dogs by the name of their dog (e.g., they call all dogs “Buddy”). Children this age also make many articulation errors. They often simplify words, repeating syllables, such as “wawa” for water; deleting final consonants such as “gah” for got; and deleting syllables from words such as “puter” for computer. Two year olds do not have the ability to produce all the speech sounds yet, so they substitute earlier developing sounds for later developing sounds, and say things like “tee” for see, “wun” for run, and “dat” for that. As a result, two year olds can be difficult to understand. In general, a two-year-old child should be understood by an unfamiliar listener about 50% of the time, although Mom and Dad usually understand them more easily.

Activities to Encourage Your Two-Year-Old’s Language