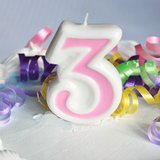 Speech and Language Milestones – Age Three
Parents of preschoolers often express concern regarding their children’s speech and language development, wanting to know how their skills “measure up.” While there is a wide range of what is considered “normal” at the age of three, the following milestones should help provide a general guideline of what can be expected at this age. Please consider what you read in the context of your child’s unique development.

Receptive Language
A typical three year old understands 1000 words! Children this age should be able to identify a number of large body parts such as tummy, nose, head, and feet, but might not yet be able to identify small body parts such as eyebrow and wrist. They are able to match three to four colors. They understand descriptive concepts such as big and little; simple time concepts such as last night and tomorrow; emotional state concepts such as sad and angry; number concepts such as some and a lot; common category names such as toys, clothes, and animals; and question words. Children this age show an increased ability to listen to and understand conversations, stories, songs, and poems. Three year olds should be able to follow two- to three-step directions involving familiar objects, actions, and routines such as “wash your hands and then come sit down for lunch.”

Expressive Language
Children’s expressive language develops rapidly between the ages of two and three. By the third birthday, a child’s vocabulary should grow to over 450 words (probably way more than parents can keep track of). Three year olds should provide their name when asked “What’s your name?” and either verbally respond or hold up fingers to indicate their age. They should understand I, me, and you and refer to themselves as “me” rather than by name. They should understand gender and use he and she appropriately. They should begin to form plurals by adding an “s” (e.g., books) and begin to use past tense (e.g., dropped). They will ask “What’s that? and “Where’s my?” and can answer “What doing?” and “Where?” questions. They will use short, simple three- to five-word sentences such as “I got new shoes” and often use a series of simple sentences to relate ideas.

Social Language
Children this age begin to tell about their experiences and talk about absent objects. Lying and teasing begins at this age. Three year olds show a wide range of emotions, affection for friends without prompting, and concern for a crying friend. They engage in make believe play and copy adults and friends. They take turns in games. Children this age talk to other children as well as adults and will carry on “conversations” with themselves and their dolls or stuffed animals. They clarify messages in response to a request to do so, produce short dialogues, and verbally introduce and change a topic. The “stories” they tell consist primarily of labels and descriptions, contain sequences of unrelated ideas, and have themes but no plot.

Common Errors
Most children this age have not yet developed the ability to produce all the speech sounds, particularly later-developing sounds such as “l,” “th,” “sh,” “ch,” and “r” and still make developmental errors such as substituting “w” for “l” (“weaf” for leaf) and “f” for “th” (“baf” for bath). Despite these errors, they should be understood 75% of the time by a stranger and most of the time by familiar listeners such as Mom and Dad or their teacher. Three year olds are forming question and negative sentence structures, but may make errors in word order. For example, they might say “Why you not going?” instead of “Why aren’t you going?” Children this age usually apply the general past tense rule to irregular past tense verbs, such as saying “bringed” for brought. Similarly, they apply the general plural rule to irregular nouns, such as saying “mouses” for mice. Children this age may have trouble talking with someone on the phone because the questions asked are often not related to the “here and now.”