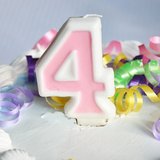 Every child’s development is unique and complex. Although children develop through a generally predictable sequence of steps, they don’t necessarily proceed through these steps in the same way or at the same time. While there is a wide range of what is considered “typical” at the age of four, the following milestones should help provide a general guideline of what can be expected at this age.

Receptive Language
A typical four year old understands 2500 to 3000 words. Children this age understand part/whole relationships; for example, that a bird has wings, a beak, and feathers. They understand time concepts such as yesterday, weekend, and afternoon; spatial relationships like first, last, and next; “money” words such as penny, quarter, and dollar; mental state concepts such as forget, remember, and wonder; and complex emotion words such as disappointed, proud, and frustrated. They begin to understand similes such as light as a feather and sick as a dog. Four year olds follow multi-step directions in novel situations, especially when the next action follows naturally from the previous action, such as “Put your pajamas on, brush your teeth, and then pick out a book.” Children this age are also beginning to understand explanations of events that have not been experienced directly, as long as the child has had similar experiences.

Expressive Language
From age three and on, it is difficult to measure actual productive vocabulary, but children this age typically produce about 1500 words. Typically, the number of words that children understand is much larger than the number of words they actually use. A lack of detailed vocabulary at this age leads children to use words that are more general. For example, a child might call a skeleton a “monster.” Four year olds use a lot of action words like run, play, and give and are able to name most letters and numbers. They construct long and detailed sentences that are mostly grammatical.

Social Language
Four year olds initiate conversations frequently. They have an easier time waiting for their turn in a group conversation than in previous years. Topic maintenance is improved, but they still tend to want to use their turn in a conversational exchange to relate information of personal interest regardless of the topic established. They have an easier time talking to others on the phone because of an increased ability to talk about events in the recent past, as opposed to things in the “here and now.” Four year olds begin to talk in different ways depending on the listener and place; they may use short sentences with younger children or talk louder outside than inside. Children this age take turns, share, and cooperate with other children. They begin to express anger verbally rather than physically. They enjoy pretending and have vivid imaginations.

Common Errors
Speech at this age should be completely understandable, although there may be some developmental sound errors with later developing sounds such as “l,” “th,” and “r.” It is not typical for children this age to have difficulty with production of multiple sounds; typically only two or three sounds remain difficult to produce at this age. Four year olds have mastered most rules related to sentence structure. They may still make mistakes with irregular past tense and plural forms such as broke and teeth. Children this age may fail to provide details when relaying personal experiences to someone unfamiliar with the event or they may include a lot of unessential details. When telling a “story” they may begin talking about events in sequence, but then begin “jumping around” to fill in more details.